With the onset of winter frosts and icy river margins, the grayling will be at the peak of her powers. And though modern weighted patterns, generally hold sway into the grayling season. It is well not to forsake some of the more traditional, and shall we say, more idiosyncratic grayling patterns favoured by our angling forefathers. And in these days when tungsten seems to be the material of choice for an ever-growing population of trout and grayling anglers. It is well to remember, that the traditional grayling flies still stand the test of time.
Like my fellow Bradfordian and famed grayling angler Reg Righyni, I always turn first to the Treacle Parkin for autumn and winter grayling. This dainty little pattern is a Yorkshire variant on the “Worcestershire Gem” now commonly known as the Red Tag. Though many anglers and flytyers dress this pattern with a yellow tag of wool. Righyni was adamant, that the Treacle Parkin had to be dressed with an orangey-yellow tag, which made the fly more easily visible in the conditions of autumn and winter. Righyni’s book Grayling is often seen as one of the definitive works on grayling fishing.

“Let us look at a few examples of the exploitation of the fancy fly principle. Frequently the floating artificial moves from a brightly shining surface in the shade of a tree. The dark fly that could be seen well against the light background can be easily lost when it enters a very dull area. But with the Treacle Parkin, for instance the darkish brown of the hackle and the greeny bronze glow of the body show up well where the surface is bright, while the glow of the tag can be easily detected against the dark background.”
A Case for Fancy Flies – Fishing Reflections. Reg Righyni

The normal accepted wisdom is that grayling move into the deeper pools and reaches, as the mists of autumn change into the crisp snap of winter. But, this is not often the case, with many grayling choosing to linger in the margins under low hanging trees and bushes. Here a plentiful supply of food drops from the canopy above, and grayling can be seen lazily sipping down this floating larder of insects. These conditions were no surprise to the famed Yorkshire angler Eric Horsfall Turner, who came up with two perfect dry flies for these conditions. The famous Eric’s Beetle, and his lesser known Grayling Fiddler which for me is one of the best grayling flies around.

Cast under a low canopy of trees, the Grayling Fiddler takes its fair share of selective feeding grayling. It is in many respects a something and nothing pattern, and quite what grayling mistake it for is open to question. Its body of red wool often sinks into the surface film, leaving the fly’s grizzle hackle spider like of the surface.

Quite what the Leeds, Wine and Spirits merchant Henry Bradshaw had in mind when he invented his fly the Bradshaw’s Fancy, is unknown. Perhaps he had undertaken a midnight tasting session in his Holbeck warehouse, before settling down for a mornings flytying. However, what he did come up with is an exceptionally good grayling fly. It can be fished as either a wet fly or a dry fly, however for me, really comes to the fore as the point fly in a team of spiders. I fish it where the fast water tumbles into the head of a pool, with grayling intercepting it as the current slows.

And there you have it, three simple patterns for autumn and winter grayling that have served me well on the dales rivers, and I can heartily recommend each and every one of them. Though Czech and tungsten bead nymphs have their place and are a perfect adjunct in times of high water, the sight of a dainty unweighted fly is more visually appealing for the angler and, more tellingly, just as appealing for the waiting grayling! 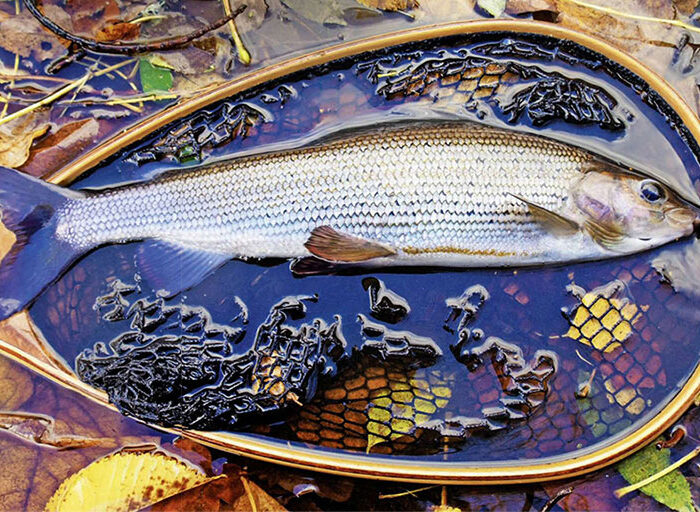