I have always been fascinated by Catskill dry flies, it stretches back to my teenage years when I was given a copy of Harry Darbee’s book Catskill Flytier: My life, times, and techniques. The book was co-written by Mac Francis who later would not only build on my interest in Catskill fly patterns, but also ignite my fascination with the fabled rivers with his book, Catskill Rivers: Birthplace of American Fly Fishing.
For years I fished my native Dales rivers with recognised Catskill classic dry flies without any thought or hesitation to their effectiveness. Though born on different rivers, the patterns were supremely at home on my local waters. And no wonder, as many of the Catskill patterns have that remarkable quality of being able to cover different hatch situations.
A classic example is the Quill Gordon, probably the most famous dry fly to come out of the Catskills if not America. Though this pattern in some way owes its existence to Britain, and its originator Theodore Gordon’s correspondence with Frederick Halford, and H. G. McClelland’s publication How to Tie Flies for Trout and Grayling Fishing. In which McClelland recognized the usefulness of quill material, for small dry flies. The pattern is nevertheless the touchstone by which all American dry flies are judged, and reaches a level of sophistication never previously seen in a dry fly.
I constantly fish this pattern to rising fish, despite it being thousands of miles away from its home waters of the Catskills. The fly’s towering wood-duck wings provide a superb silhouette in bright sunlight and shadow, thus providing both angler and fish the perfect opportunity to track the fly. Its stripped quill body actively mimicking the segmented body profile of countless flies. 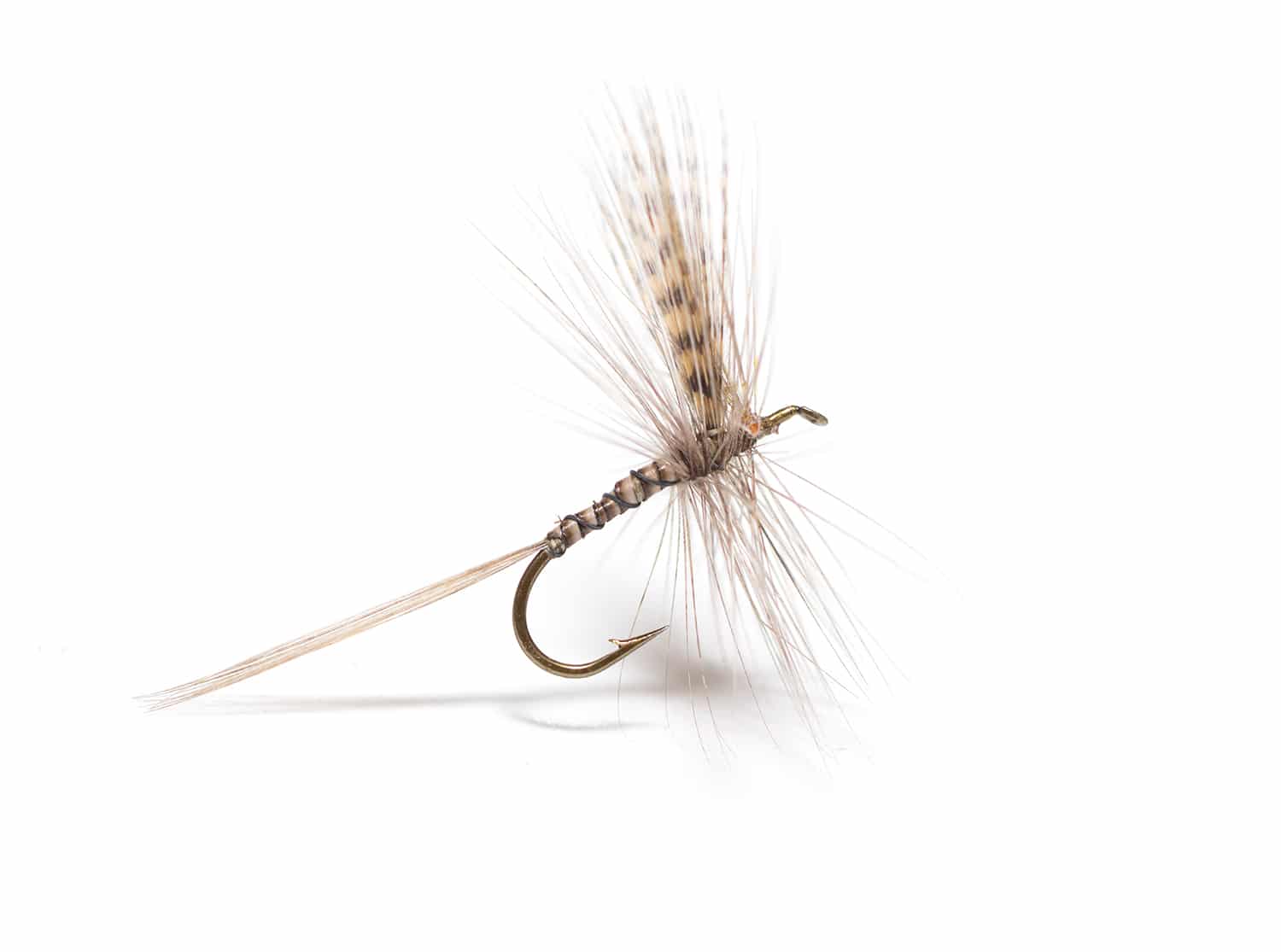 Through the years of course I learned to adapt traditional Catskill dry flies and invent my own regional patterns based around the Catskill style. One of these was my dressing of the Olive Upright which featured the distinctive stripped quill body and wood-duck wings. Although it was primarily aimed at suggesting the Olive Uprights found on the River Wharfe, I found this pattern increasingly adaptable to numerous hatch situations where a range of native olives were on the water. 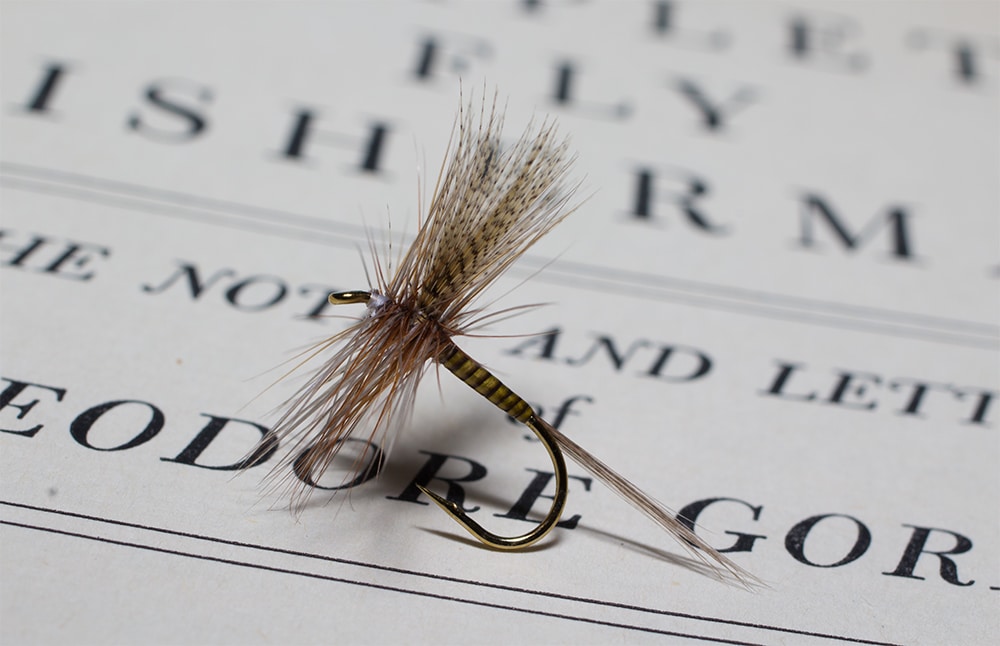 My love affair with Catskill dry flies continues to this day, and although I don’t tie and fish the Catskill style of dry fly as much as I used to. I am still captured by their simple elegance and beauty, and never stop in my quest to learn more about these iconic dry fly patterns, the region and the people who created them.

As a consequence of writing a book about my own regional patterns, I was asked to talk about the history of the North Country Flies and demonstrate aspects of their tying at this years International Fly Tying Symposium in Lancaster, Pennsylvania. This trip of course not only gave me the opportunity to mix with some of the world’s best fly-tyers, but also the perfect opportunity to visit some of the Catskills holiest of shrines to flyfishing and flytying through the generosity of my good friend John Shaner. 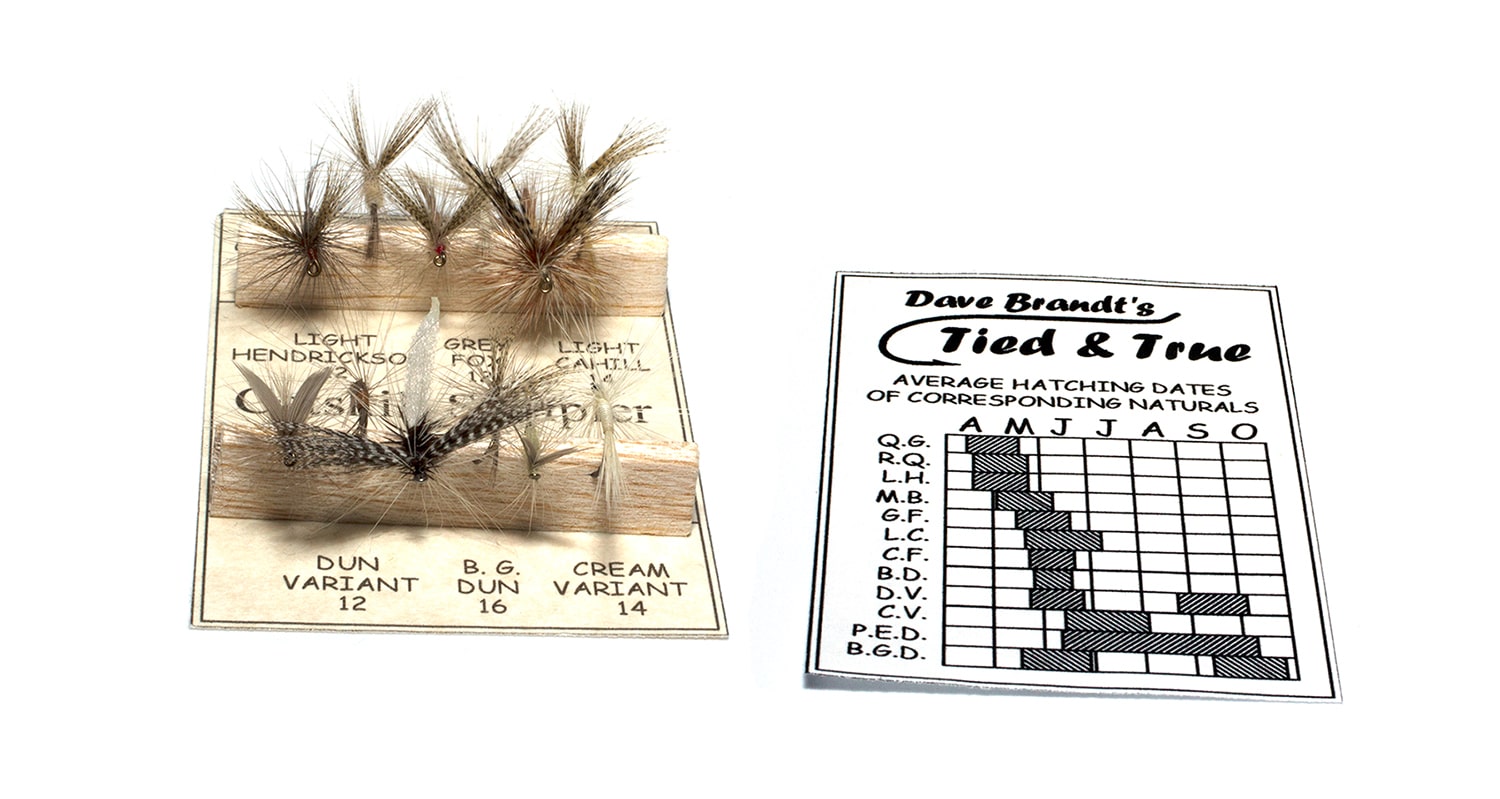 The Symposium was everything I had heard, and showcased some of the world’s best fly-tyers. With an eye on Catskill patterns I made a B-line to the table of one of the Catskill region’s acknowledged greats Dave Brandt. Dave is a font of all knowledge relating to the tying and fishing of traditional Catskill dry flies and instructs at the world famous Wulff Fly Fishing School which is situated in the heart of the Catskills at Livingson Manor. Dave was as ebullient as ever and did the great honour of sitting in on my Featured Fly-Tyer demonstration and my latter talk on the history of North Country Flies to a packed audience. His gave me some invaluable tips regarding tying the Catskill patterns and also a boxed selection of his superbly dressed flies. I have already taken onboard some of Dave’s tying tips, in particular his tip about not trimming the wing butts at a slant. But cutting them flush and then butting the tailing material up flush with them, giving a slimmer body profile. 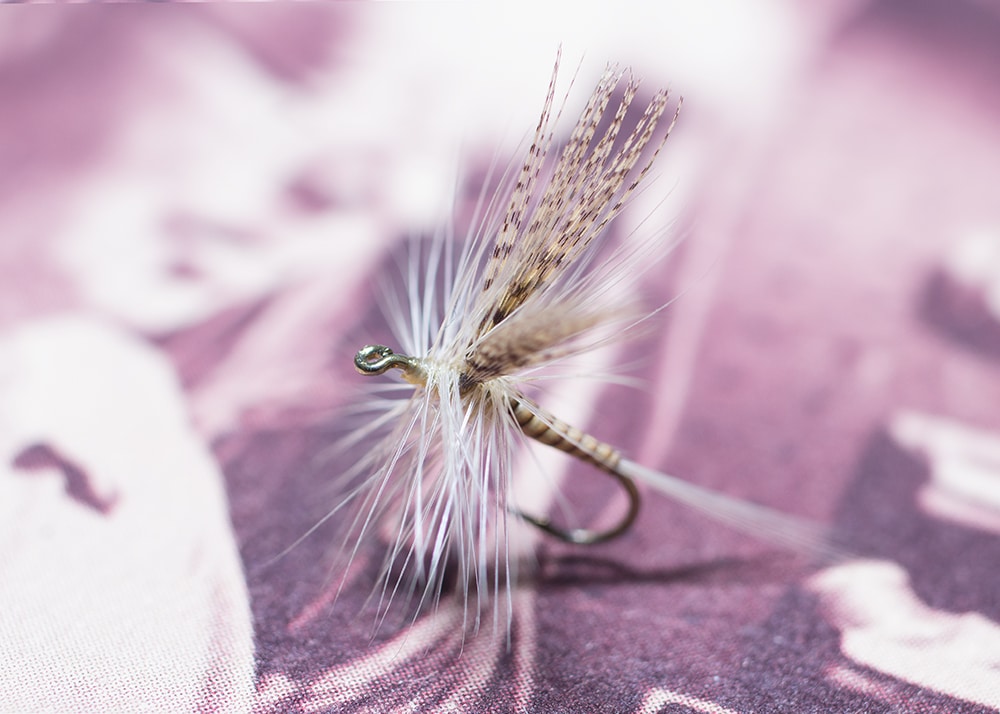 In line with the Catskill theme, I was also honoured to spend a couple of hours visiting and speaking to Joe Fox the grandson of Mary Dette Clark, at the world famous Dette Fly Shop in Roscoe. I first visited this shop in the 1990’s and it is still a time capsule of Catskill traditions. After some retail therapy I even managed to walk away with a few Eric Leiser caddis flies. 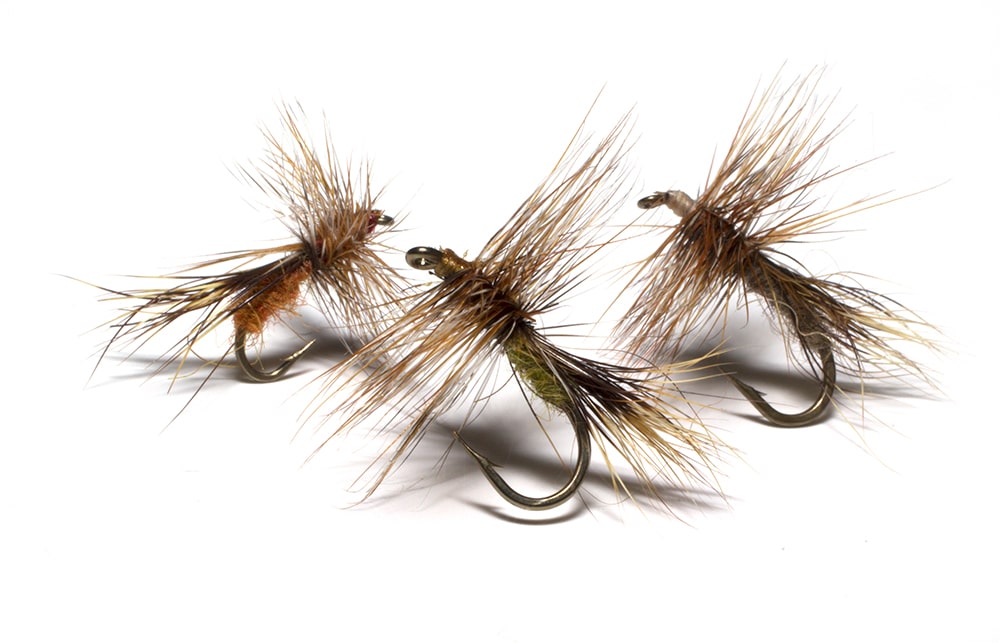 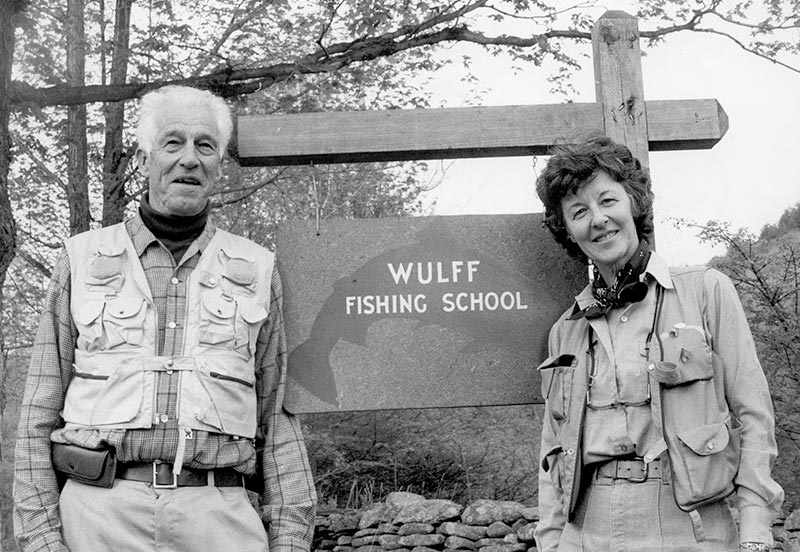 As morning drifted into afternoon we made our way up the Little Beaverkill for a meeting with probably the greatest fly-caster and fly-casting teacher who has ever lived. I have been in awe of Joan Wulff ever since I read her book on fly casting techniques in the 1987. She was single-handedly responsible for me not abandoning flyfishing after an accident left me barely able to cast. Her book revolutionised my thoughts on casting, and with the aid of “Fly-o” got me back into the loop.
As I chatted for a couple of hours in the company of Joan and her husband Ted Rogowski, I couldn’t help but be amazed by the kindness and generosity being extended by one of our sports greatest figures to a total stranger from the other side of the world. Even in the great lady’s advancing years she was all I expected her to be, easy, graceful and as precise as her casting. As we chatted, I was guided down to Lee Wulff’s private sanctum, where many of his artefacts and belongings from a lifetime of flyfishing and film-making were kept and catalogued ready for donation to libraries and museums. Then finished with a one-to-one casting lesson in her front room! 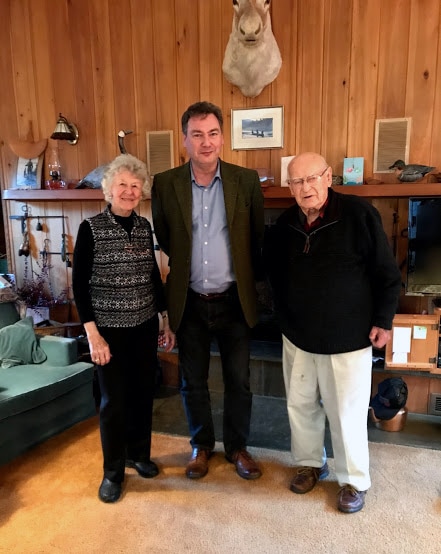 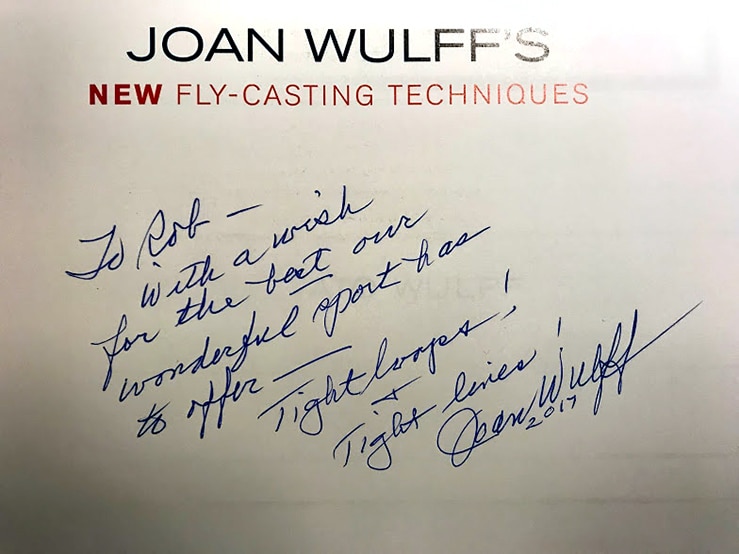 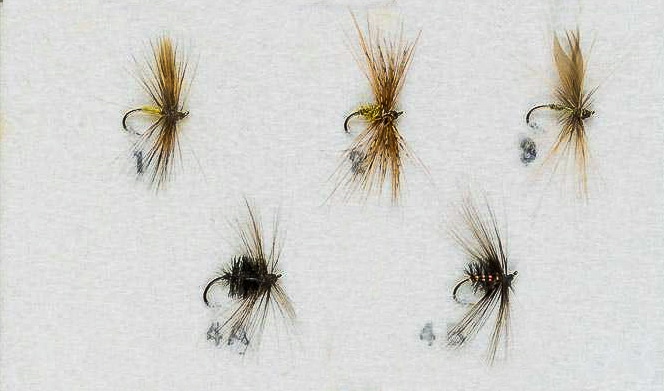