The upstream presentation of traditional soft hackled wet flies on rivers is a subject close to my heart. It is a presentation method I favour, even though it is not a productive searching technique for trout and requires more effort than a downstream presentation. However, it has to be said that I can more often than not be found casting my wet flies upstream in certain situations and on certain types of water. Particularly in turbulent pocket water!

Although many have simplistically attributed the invention of the upstream wet fly to W.C. Stewart and his publication The Practical Angler, or The Art of Trout-Fishing More Particularly Applied to Clear Water of 1857. The reality is, however, something different. For centuries anglers were at the mercy of three contributing factors which controlled the practical presentation of their flies. Namely, the strength and direction of the wind, coupled with the often crude nature of the fishing tackle they were using, principally horsehair lines and rudimentary fly rods. That’s not to say however that a kind of dapping technique was employed to fish the flies. Traditional light horsehair lines and leaders were quite capable of being cast in shall we say a modern manner. A cursory look at the technique of modern Tenkara angler shows how a cast could be executed with traditional horsehair lines and leaders. However, these traditional horsehair lines were incredibly light, and any stiff breeze would have forced a rethink in the direction of the presentation of the flies. Especially in the case of some traditional north country fly casts, where a point fly was often attached to a single strand of hair!  So, it becomes quite clear that wet flies must have been fished in an all-round manner, dictated by wind and stream conditions. Stewart, of course, recognises these occasional “upstreamers” within his text but goes on to state that he has never seen anglers consistently fishing upstream wet flies “artistically”, which is his code for skilfully. I would argue that just because Stewart has not seen these skilful anglers, doesn’t mean they didn’t exist. Henry Cadman writing in Harry Druidale Fisherman From Manxland To England stated that he fished both upstream and downstream before Stewart. Whilst also stating

“I recommend every man or boy who wishes to become a good angler to read Stewart’s Practical Angler, but I must state that I think that if Mr Stewart had lived to attain the age of sixty years, and republished his book shortly before his death, he would have considerably modified some of the opinions expressed in his Practical Angler.”

What Stewart brings to the table, is a methodical examination of the merits of a short line upstream presentation of a sunken fly, profoundly influencing a later generation of celebrated wet fly anglers including G.E.M. Skues, Edmonds & Lee, and James Leisenring.
Although, as Paul Schullery succinctly asks “Where did he (Stewart) ever get the idea that the wind only blows upstream or downstream and hardly ever across the stream?”

From experience, I have come to view the fishing of upstream spiders as more of a targeting tactic rather than searching tactic. For an upstream presentation of spiders to be consistently successful, there needs to be a form of hatch situation going on, with fish “looking up” and aggressively focusing on emerging or trapped insects in the final few inches of the water column. In essence, the real key to successful upstream wet fly fishing is to be found in the timings of its application, coupled with the characteristics of the water being targeted.
On turbulent boulder-strewn pocket waters, where fish have little time to respond to the drifting fly. The window of opportunity to fish the upstream wet fly is greater, as trout are less circumspect in their selection of food. But presentation still must be keenly studied, as drag is more noticeable in these areas due to confluence of many different currents squeezing between the boulders. Reducing the amount of fly line on the water to a bare minimum is key in these situations. As is modifying your leader length and taper, to easily turn over your team of flies at such short range. Modifying your casting action by opening the casting loop aids this short-line presentation and leads to fewer tangles when using a shorter 3-fly rig. For my part when fishing these pocket waters, I have increasingly turned to the use of Luke Bannister’s 3½ft furled leaders, with the addition of 4ft of 6x (3.2lb) Hardy Copolymer tippet material, giving a basic leader configuration of 7½ft in length. The use of a short furled leader greatly improves the turnover of the flies at the required short distance, whilst also allowing the angler to keep as much fly line off the water as possible. Depending on the nature of the stream being fished, it is even possible with this set-up to fish with no fly line out of the rod tip.

Of course, spending hours designing and tying up various leader designs and tapers are no good if an angler doesn’t master or at least consider the many and varied intricacies within the spectrum of the upstream presentation of wet flies. And how flow-dynamics not only affect the presentation of the flies but also the required design characteristics of the flies themselves. I’m a great believer not only in trigger points within a fly design but also trigger points within the actual presentation of the flies themselves. For instance, if the fish are actively feeding on struggling emerging insects, then our flies and the presentation should accurately suggest this with the kick and buzz of an emerging insect. Likewise, if the fish are feeding on drifting spinners, then our flies should mimic this with as much dead drift as possible.
When fishing upstream wet flies in fast pocket waters I have found that increasing the fly size as well as using patterns with discernible trigger points is often the key to success. Patterns such as the winged Greenwell Glory, Dark Bloa or a heavily hackled March Brown, often out fish other soft hackled patterns by a large margin.  Another tactic to use in these pocket waters is to place a slightly weighted pattern as the point fly in order to provide some slight check to the drift of the flies. However, I must include this caveat – that it is the method that catches the fish, not just the fly. In other words, the “right” fly presented in the wrong way will not catch as many fish as the “wrong” fly fished in the right way. 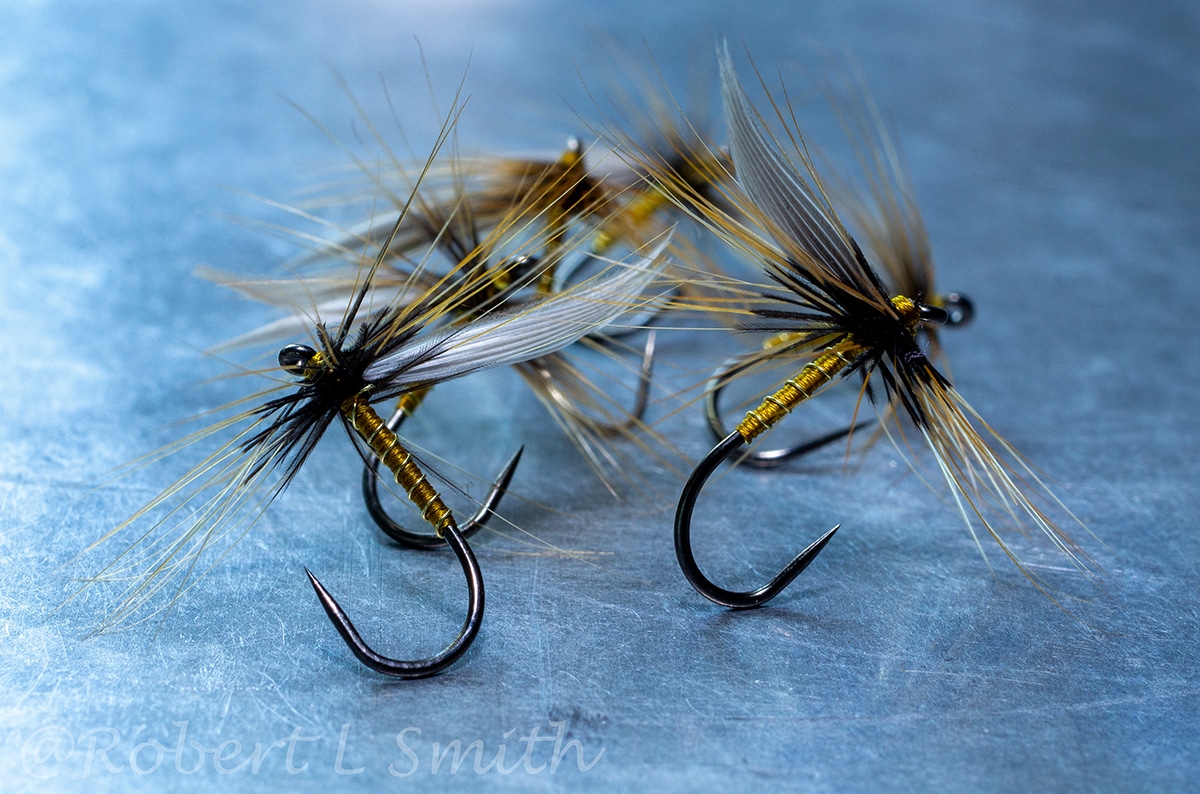 So, what is a successful upstream method that catches fish in pocket waters? Well, the often-repeated maxim of casting a rod length of line in these situations is sadly incorrect and doesn’t offer the angler the required level of touch and control needed in this water type. The onstream reality of fishing these pocket waters is that presentation is mainly “leader only”. Ultra-short presentations and drifts coupled with a long rod held at a high incline bypass the need for anything more than a few feet of line existing beyond the rod tip. Of course, in less turbulent and more uniform water, a greater degree of fly-line may be extended beyond the rod tip. However, using a minimal amount of fly line and focussing on a technique where only the leader and flies are on the water allows us to constantly stay in contact and control of the flies. This coupled with the raising of the long rod affords the ability to imperceptibly bring the flies back towards us at a slightly faster pace than the water, fishing in almost induced-taking manner.
The often-quoted line about the exceptional upstream wet fly angler instinctively sensing the take and tightening into fish, is because the onlooker has missed the subtle induced take of the fly as it drifts back to the angler imperceptibly quicker than the streams own current.

To fish upstream wet flies successfully and consistently in broken pocket waters, you need a long rod capable of casting a very light line. My preference is for a 10ft Marryat Tactical rod matched to a 3 weight line, it can load short casts with no fly line so is perfect for my furled leader and tippet combination. This configuration gives me the ability to fish short casts often with no fly line outside the tip and is light enough to not cause fatigue when holding the rod high and tracking the wet flies through the drift. I also prefer to cast my flies upstream at an angle of between 10 and 20 degrees, concentrating first on the slower creases behind boulders before turning my attention to fish the faster seams squeezing between the rocks and stones. Lastly, as I progress up through these areas, I start to concentrate on fishing the cushions of quiet water in font of boulders, in the hope of picking up fish in these areas. It is not as some dry fly purists believe, a chuck it and chance it method of fishing. Small areas are specifically targeted, casts are adjusted, and drift angles constantly changed. Fishing is fast, kept to a maximum of two or three drift through the targeted area before moving ever upstream. The push of the river’s current and the rocky nature of stream often make wading difficult, but a fish taken in such circumstances is more rewarding. In the words of F.E. Tudor writing in his 1955 in publication, Trout In Troubled Waters. “A day’s fishing here involves physical toil. But it is worth it!”

For any reader wishing to learn more about the art of fishing wet flies, I would recommend they visit the Fishing Discoveries website and read their fascinating article on wet flies and wet fly fishing. 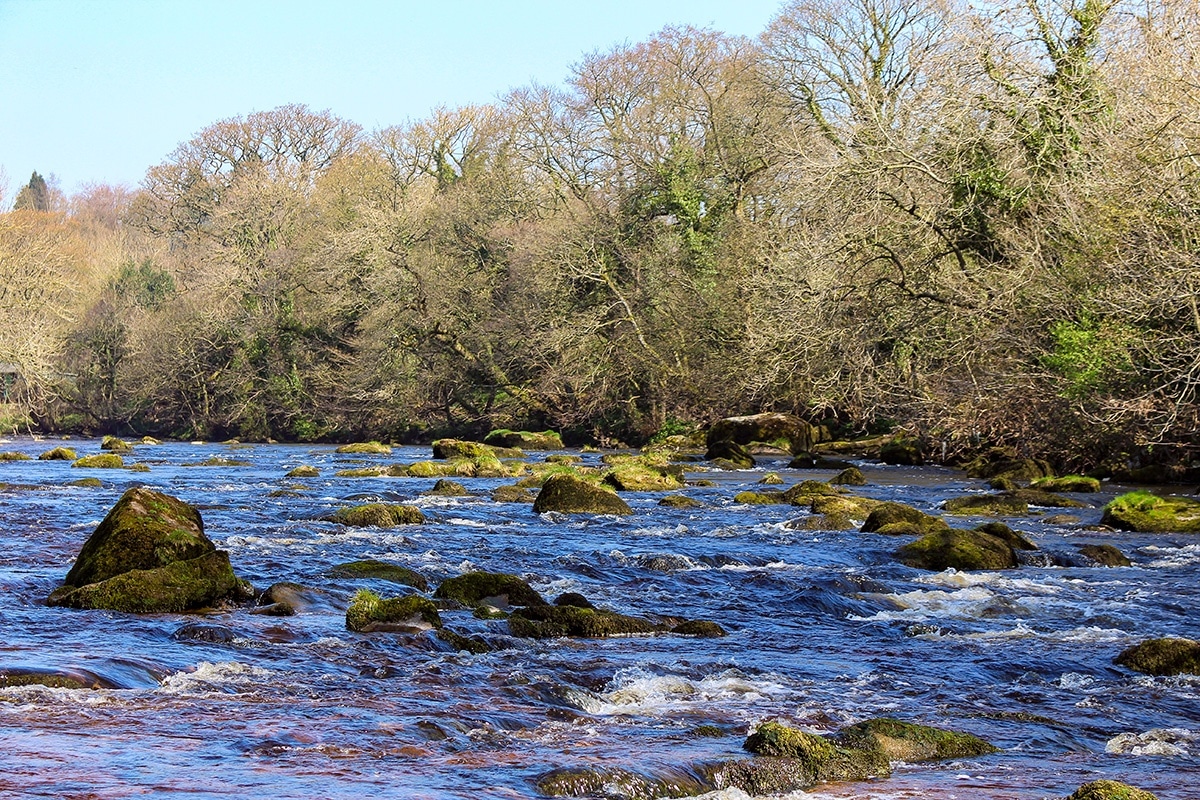 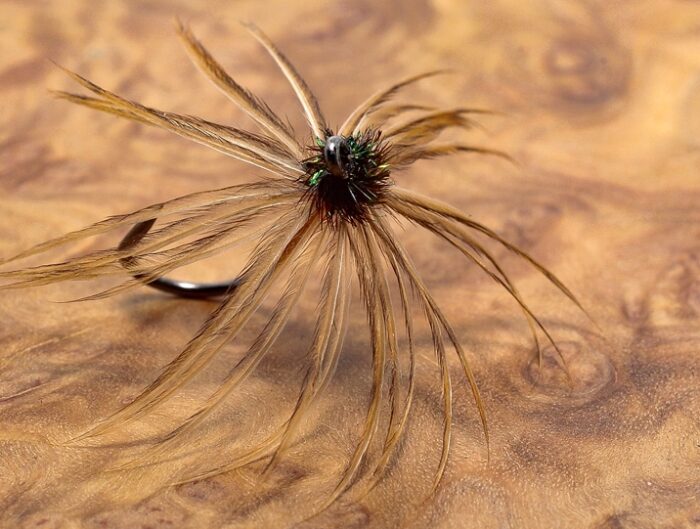 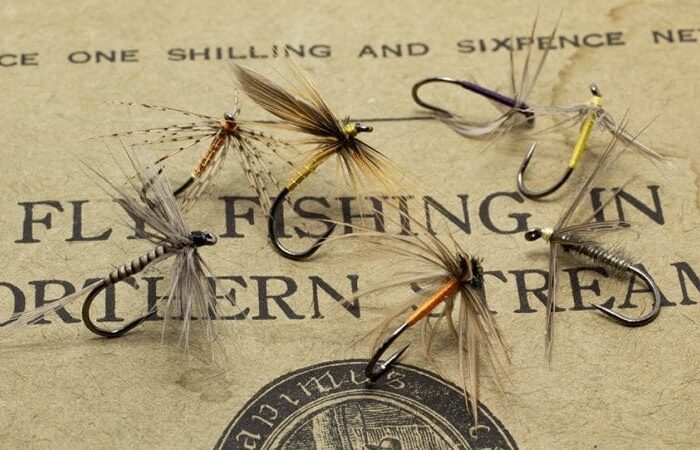