The Gold Ribbed Hare’s Ear features one of flyfishing’s most ubiquitous dubbing materials and I can’t think of any other flytying material that is so adaptable as the fur from the Brown Hare (Lepus europaeus). For centuries it has been a staple of numerous flytying dressings with one section of its hide lending it name to some of the sports most famous fly patterns.
Charles Cotton in his contribution to Walton’s fifth edition of the Compleat Angler, gave us two early examples of the use of hare’s fur with his dressing of the Bright Dun Gnat and Fern Fly. Which respectively use white hares scut (tail) and the fur from a hare’s neck.

Bright Dun Gnat
“There is also a very little Bright-Dun Gnat, as little as can possibly be made, so little as never to be fished with, with above one ha’r nest the hook; and this is to be made of a mixed dubbing of marten’s fur, and the white of a hare’s scut, with a very white and small wing”

Fern Fly
“Next a fly called a Fern-fly; the dubbing of the fur of a hare’s neck, that is, of the colour of fern or bracken, with a darkish-gray wing of a mallard’s feather.”

Later a succession of published flytyers would build on Cotton’s legacy, and provide us with some of the most well-known fly patterns to feature the fur from various parts of the hare. Patterns such as the Gold Ribbed Hares Ear and the Hares Lug and Plover becoming some of the most widely fished fly patterns, firmly cementing the role of hare’s fur in flytying.

Quite what makes the hair fibres from a brown hare’s skin so attractive to trout and grayling is unknown. Maybe it is the subtle mix of natural hues that are evident within individual hair fibres. However, even when the fur is dyed it still has an unknown attractiveness. Which leads me to believe it is the spiky contrasting guard hairs within these mixed fibres, dyed or otherwise, that lead to the almost magical quality of this fur.

The Gold Ribbed Hare’s Ear dry fly gives us a great example of how a simple mixture of poll fur taken from the base of the hare’s ears can not only make a great dubbing, but more tellingly a great trout fly. Though the patterns origins are obscured by time. It was in Halford’s era, considered to be one of the best flies on the Test, and a renowned imitation of the medium olive. Although Halford was later to discard it as being too nondescript for his liking, he included the dressing in his 1886 publication Floating Flies and How To Dress Them. H.S. Hall the promoter of eyed hooks remarked of the Gold Ribbed Hare’s Ear: “There are times when every fish in the river seems to be bulging and ignoring flies on the surface, but I have had really good days on the Hare’s Ear floated cockily over roving fish.” 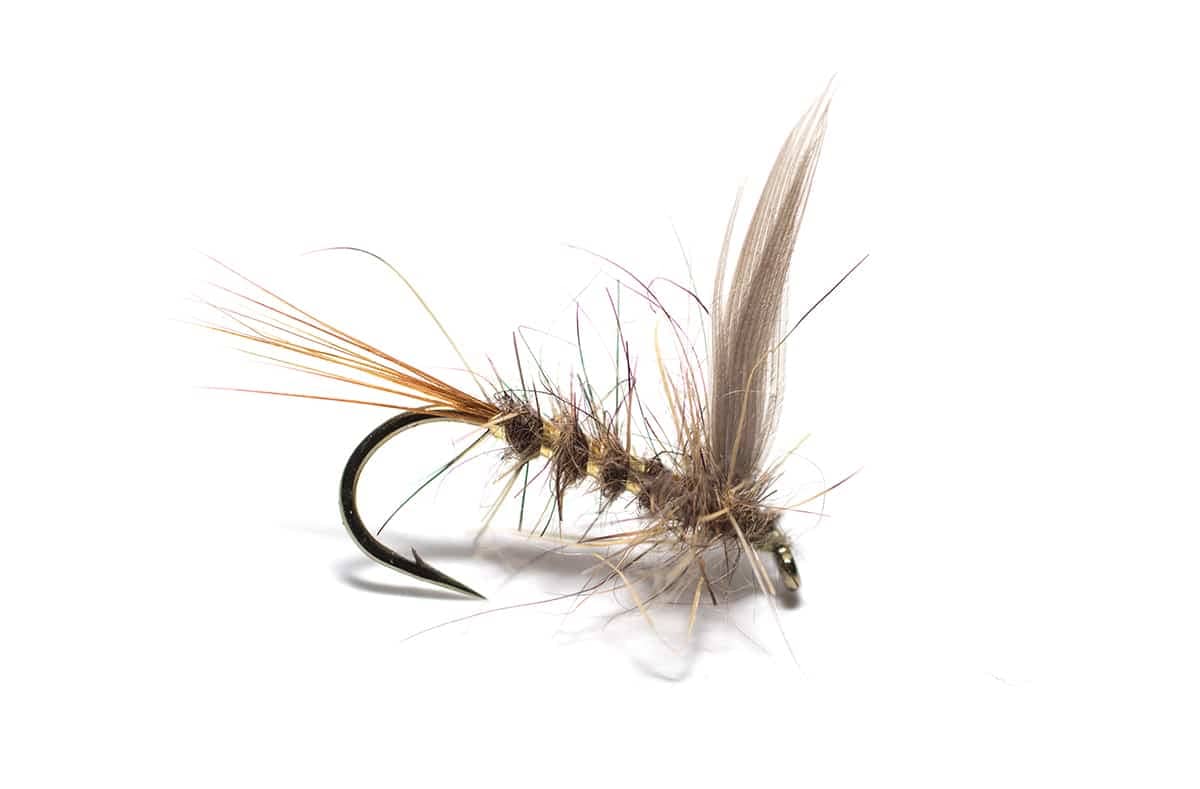 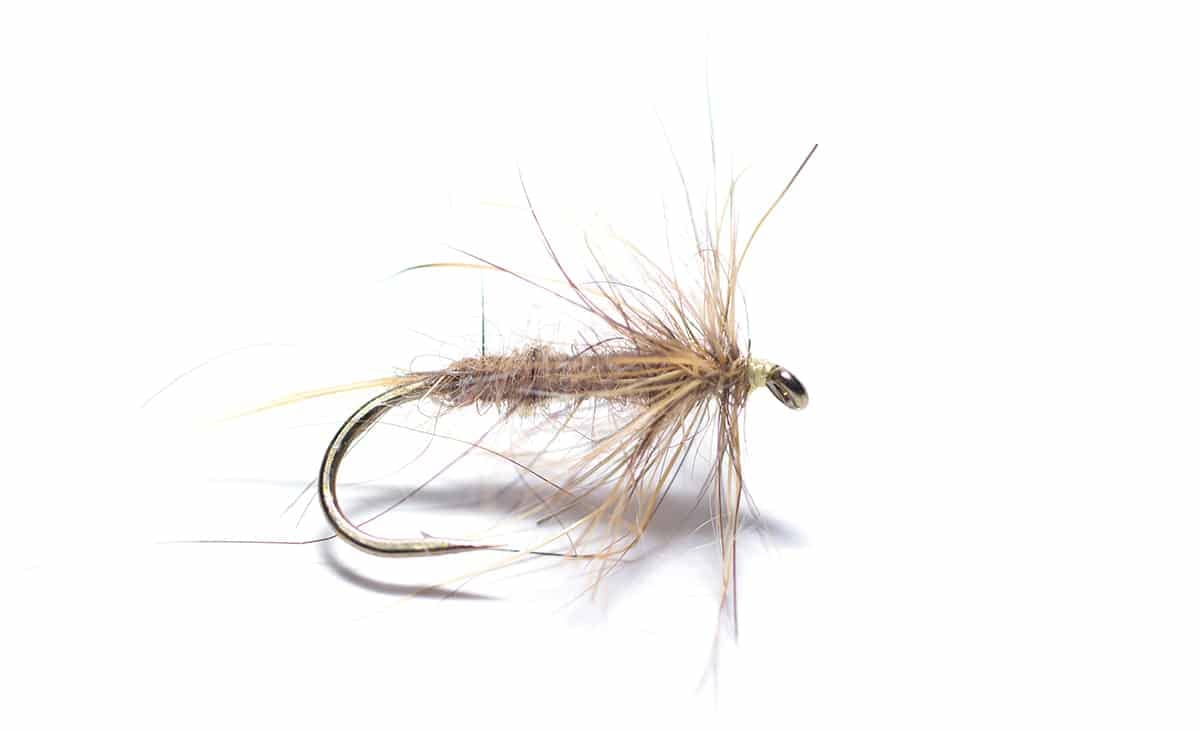 Hook: 0 or 00
Wings: Medium or pale starling.
Body and Legs: The body is formed of dark fur from a hare’s face, ribbed with fine flat gold, and the hare’s fur picked out at shoulder to form legs.
Whisk: Red cock’s beard hackle.

In A Dictionary of Trout Flies Courtney Williams charges Halford with at best an inconsistency, and at worst a deliberate slight-of-hand with regards to the dressing of the Gold Ribbed Hare’s Ear.

“Surprisingly enough Halford dressed it in this manner solely so that it might comply with his conventional dry-fly theory and with a truly magnificent disregard for what it was designed to represent. And ever since then the G.R.H.E. has been commonly tied with wings and often with another abomination – a feathered hackle. Halford was not the only guilty party as other well-known fly-dressers of his day (including Holland of Winchester and Ogden of Cheltenham) followed his example. That their flies killed well enough it true for the Gold Ribbed Hare’s Ear seems to attract fish however it is tied, although I am tolerably certain that dressed with wings and used as a floater, it never kills so well as in its original hackled state.”

Skues was also quizzical with regards to what fish take the Gold Ribbed Hare’s Ear for. And in his 1921 publication The Way of a Trout with the Fly: he was still at a lost to explain the effectiveness of the pattern, and just why hare’s fur worked so well as a dubbing.

“Why, then, should a pattern dressed with a body of a dusty grey-brown, ribbed with flat gold and extremely rough, be taken by the trout for a smooth-bodied fly with an olive-green body?”

Notwithstanding of the machinations of these blinkered chalk stream philosophers. The use of hare’s ear fur coupled with the glint of gold tinsel has long been advocated in the north of England. Where a succession of anglers and fly-dressers have been using variations on the same theme to create some of the best soft-hackled trout flies. John Kirkbride of Carlisle writing in his 1837 publication “The Northern Angler” gives us the precursor to todays Hare’s Lug and Plover with his pattern The Golden Plover, which utilises a hackle from a Golden Plover and a dubbed hare’s ear body to make one of the most successful north country spider patterns.

This is one of our north country flies, and kills at times tolerably well on some of our rivers in April and May. When made as a winged fly the body must be of orange or yellow raw silk with a black hackle run over it up to the shoulders; the wings must be of a feather from the back or shoulders of a golden plover. The tail may be tipt with gold. When as a spider-fly, the body ought to consist of the fur from the hare’s ear, dyed yellow, rather dark; the hackle must be a small yellow-mottled feather from the back of the plover – hook, N0. 8 or 9.

Much to the probable revulsion of Halford, Williams and Skues, I fish the Gold Ribbed Hare’s Ear in a variety of fashions especially in the form of a weighted nymph. The nymph has like all Hare’s Ear patterns, just the right amount of nondescript about it, covering a variety of Baetis nymphs, as well as caddis larvae. It is readily taken by both trout and grayling on the rivers and streams I fish, and along with the pheasant tail, is my favourite nymph pattern to fish upstream to sighted fish. 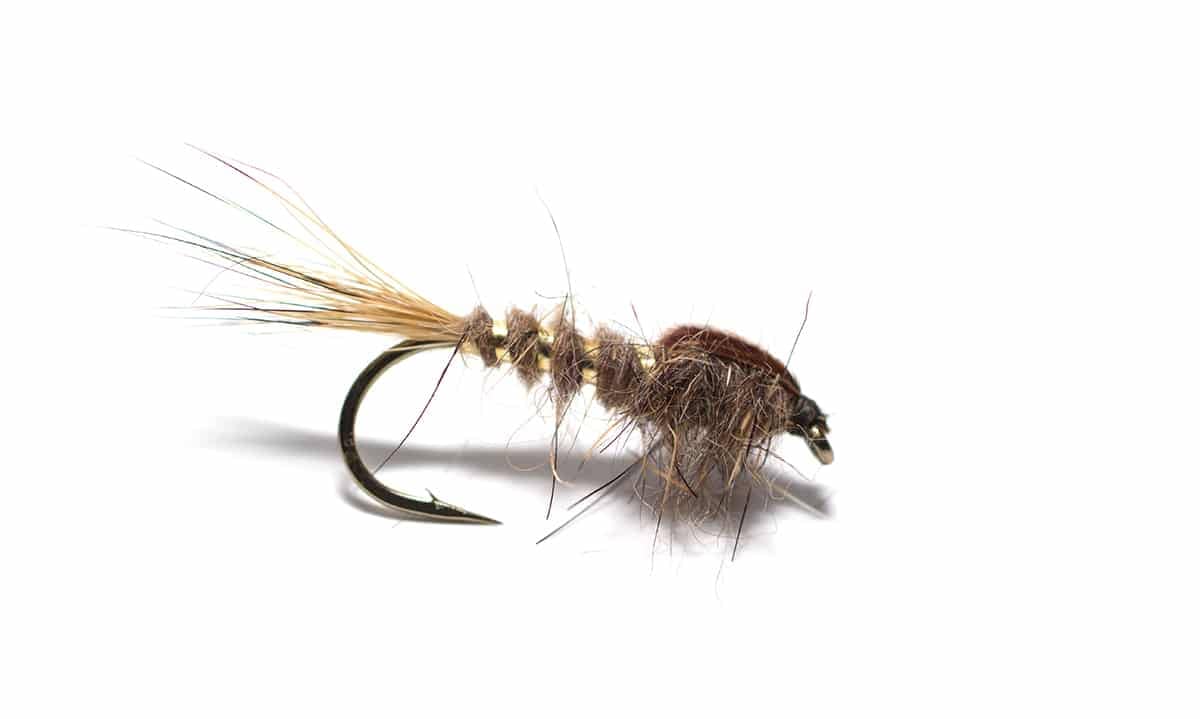 Another type of the Gold Ribbed Hare’s Ear is the F Fly version. It is little more than the original dressing but with the addition of a CDC wing. This not only aids the fly’s floatability but also visibility, which is crucial on the turbulent Dales rivers where it is often difficult to see any fly pattern lying in the surface film. It’s a fly that covers all bases, and can be easily mistaken for a sedge or emerging nymph by hungry trout.

Much to chagrin of Courtney Williams, I love fishing a fully winged and hackled Gold Ribbed Hare’s Ear. There is something magical in the mixture when you add a split wing and hackle to this pattern. Like all patterns in the sequence, it looks like nothing but seems to represent everything. And although split-wing dry flies have pretty much gone out of fashion nowadays, there is an enchantment about fishing a traditional styled dry fly to a rising trout.

Al Caucci and Bob Nastasi are often quoted as the originators of the Comparadun style of dry fly with their 1975 publication Hatches. This Hares Ear comparadun pattern sits perfectly in the surface film of the river, with its splayed upright deer hair wing giving a perfect silhouette to both the trout and the angler. Like all great trout flies, the Gold Ribbed Hare’s Ear Comparadun has a that unknown quality. It seems to our eyes to imitate nothing, but to the waiting trout, it has a mysterious appeal. And that is the conundrum at the very heart of every Hare’s Ear pattern.