This classic spider found in numerous north country manuscripts and publications has been one of my favourite patterns to dress for many years. And features as one of a small group of flies that I regularly come back to when doing flytying presentations. Like many other tyers who regularly demonstrate at flytying shows. My list of demonstrative patterns has expanded and shrunk with an equal measure over the years, and yet there still remains the same small cluster of familiar patterns at its centrepiece. And it is here that the Brown Owl with its judicious use of hackle, silk and herl, frequently comes to the fore during these flytying presentations. 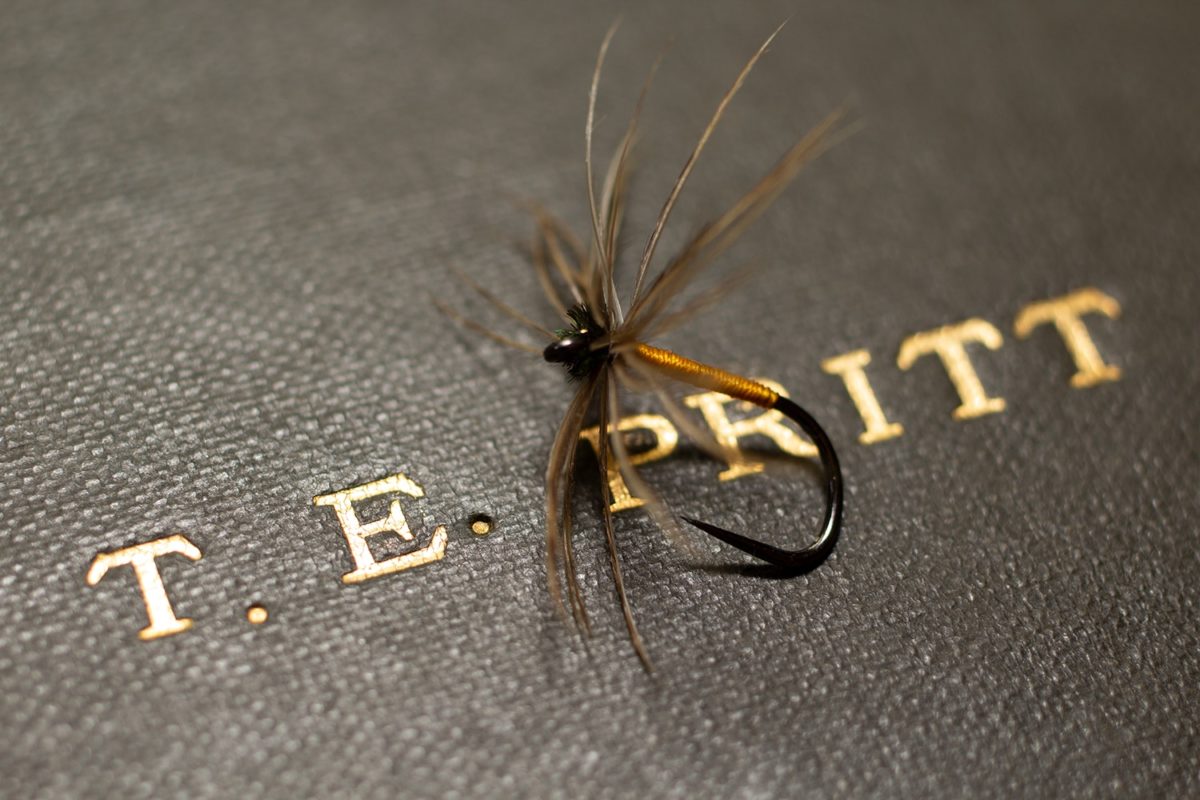 This preference for showcasing the tying of the Brown Owl never really dawned on me until a trip to the USA. Here I demonstrated the tying of this simple and effective north country pattern to an audience of knowledgeable tyers and anglers. And in an intervening moment after the show, I was asked how I came to choose the list of patterns which formed my earlier demonstration. My answer was one that I had given many times, about showcasing a range of tying techniques and some remarks about the pattern’s history. But the more I later thought about it, the more apparent it became that this rather glib answer did not fit with my demonstrating the tying of the Brown Owl. The reason for its inclusion was more deep-seated than just showcasing techniques. And on reflection, it became obvious that my need to showcase this pattern was born out of my love for the owl’s hackle and its delicate nature. 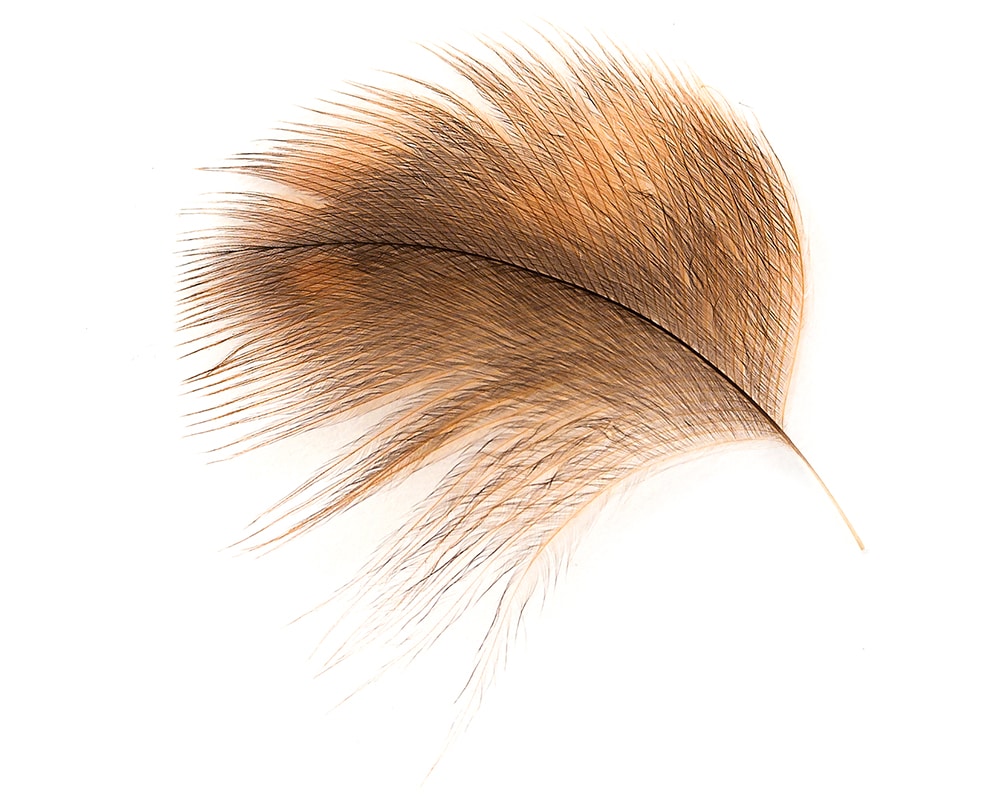 Now it is important that I first put on record that the Brown Owl or Tawny Owl to give it its proper name is rightly a protected species. And that I in no way condone the killing of any species of raptor. However, I am in the fortunate position of having several large vintage collections of flytying materials in which owl hackles and wings are a prominent feature. Through good fortune (though sadly not for the owl) I have also been able to pick up a few roadkill skins on my travels throughout the dales. So, I am somewhat privileged and individual in my ability to use these hackles.
So, what makes the owl feathers so endearing, and such a pleasure to tie with? Well, simply put. The overcovert feather from the owl has a soft delicate quality all of its own. And even in the large list of delicate hackles used in tying north country flies, the owl hackle stands alone with regards to softness and movement. 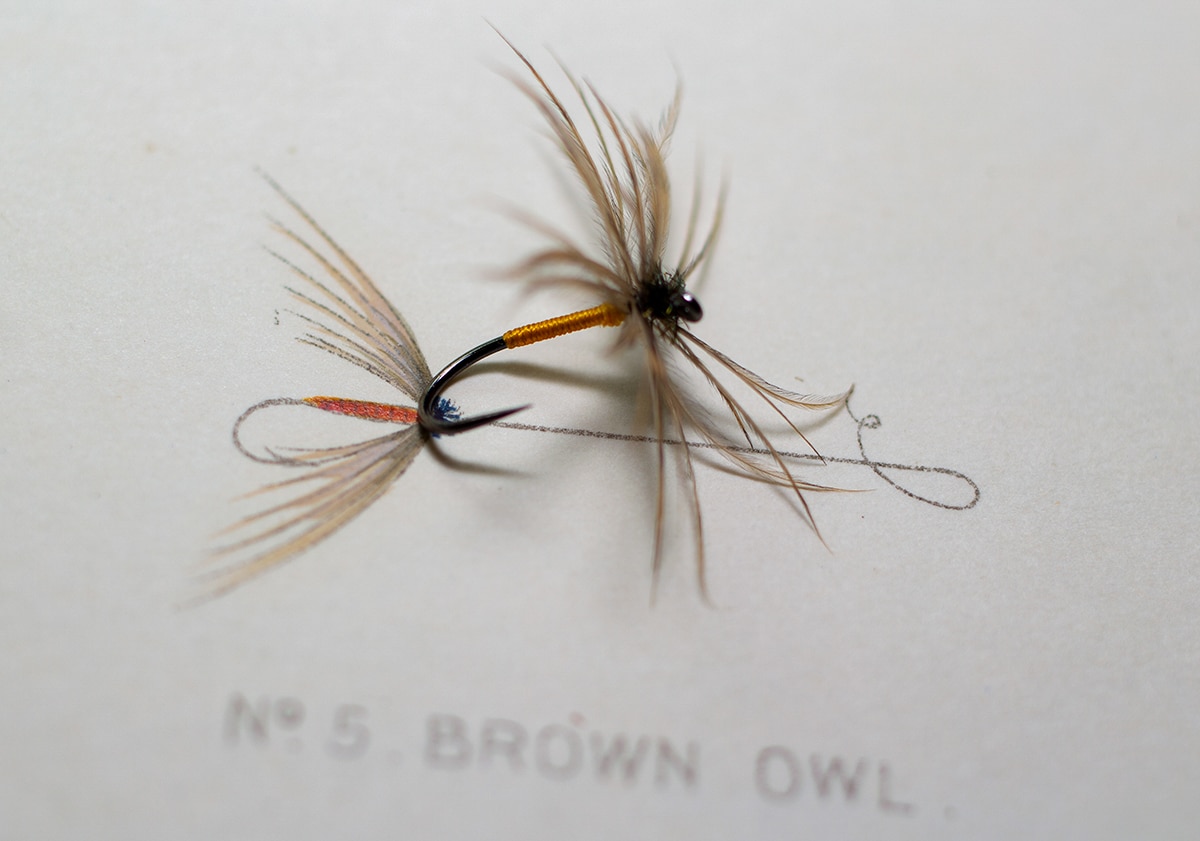 Pritt’s dressing of the Brown Owl

These super-soft hackles are unforgiving to the flytyer, and often make a mockery of lapses in technique and handling. Removing these delicate overcoverts from a wing has to be a delicate and thoughtful process, gently teasing each hackle from the wing. The modern tyers often-quoted remark about stripping hackles holds no relevance here and shows a mirror to their unfamiliarity with the subtleties of delicate natural materials.
These hackles have a fragility that requires a deftness of touch, particularly when wrapping a turn of hackle. Hackle pliers have to be gripped gently, and each hackle turn is taken with an indefinable mixture of steadiness and delicacy. For me these hackles bring out the gracefulness in flytying, and exhibit richness that and make them nigh on impossible to imitate or substitute.

But it is not just this delicacy that makes them so inspiring to work with. Their subtle rich combination of dark oak and chestnut brown shading is distinctive with a mottling somewhat similar to the Mottled Umber (Erannis defoliaria) moth. Even within the large catalogue of north country materials, the brown owl’s hackle colouration remains distinctive, with a quality set apart from the rest.
Of course, from a trout’s point of view, many will argue that these characteristics make no difference and that the trout cannot tell the distinction between an owl and a woodcock’s hackle. But this belief simply ignores the philosophy of flytying, and the artistry contained within the precise selection and usage of different materials. To the trout, it may make no difference, but to the flytyer, it makes all the difference in the world, and often defines us as artisans.

Of course, woe betides anyone who without the benefit of a vintage collection of materials seeks to dress flies with owl feathers. The bygone days of raptor persecution should be a thing of the past and as modern flytyers, we must seek to find more ethically sourced materials for the dressing of our trout flies.
So for the sake of completeness, it is only right that I should offer some thoughts on a suitable alternative to the owl overcovert needed to dress this traditional north country fly pattern. The first real characteristic to be met in any substitution is softness. The owl overcovert feather is the epitome of the term “soft-hackle”, and so any substitute hackle needs to exhibit this required softness. In this regard, it is worth looking towards rump feathers for this distinctive trait, for they are often some of the softest hackles on a bird plumage. Next is the matter of colour and mottling which is so distinctive in the brown owl hackle. Dying hackles simply does not produce the right mellow tones and combinations, so again we have to look towards nature.
For my part, the closest I have come to find a suitable substitution for owl is the rump feather taken from a Reeves hen pheasant. These feathers have the right mixture of a dark oak & chestnut brown colouration, though sadly have a slight barred rather than mottled complexion. That said, it is probably the best and most readily available alternative to this most charming and delicate hackle problems. 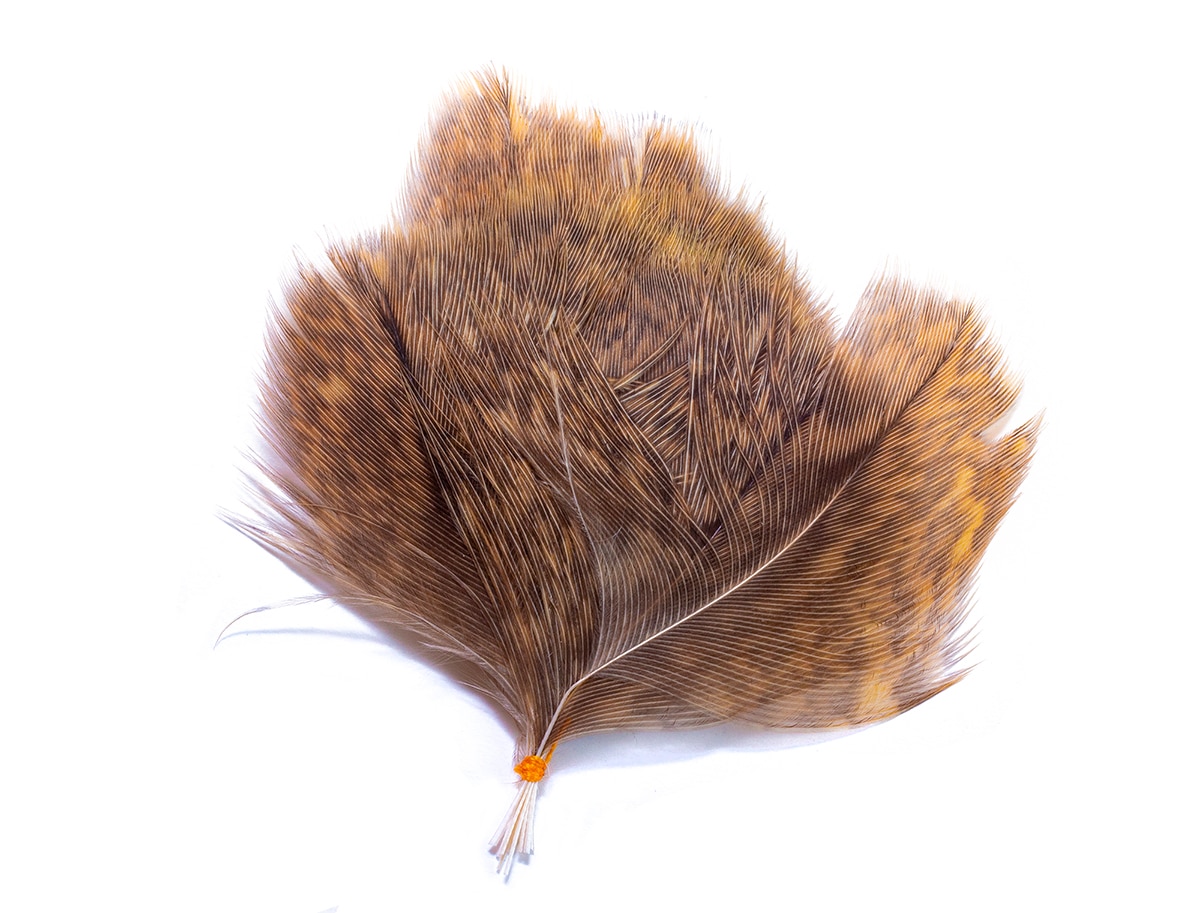